Out Skerries Shetland. As far east as you can go!

Late last year (maybe late October or so) Steve and Alison had taken a weekend trip to Out Skerries which are a group of islands about 12 miles off the mainland (that is Shetland mainland not mainland Scotland) and is accessible by ferry most days or by air about 4 times a week. The population is around 80 people and many have lived there all their lives. I would think that nearly all had ventured off the island at some point but many would not have ventured further than Lerwick or other islands generally to visit family or friends or most likely for a wedding. The weddings can go on for a few days and that can easily stretch in to a week if the weather prevents their return home. I understand that most weddings are in the early summer to minimize the effect of weather but it is omnipresent!
Out Skerries is as far east as you can go in the UK, so we added that to the list after visiting Point Udall on St Croix last November. It is the most easterly point in the US.
The Shetland Island Council maintains essential air service to several outer islands and they operate (via a company called Directflight) two BN Islander aircraft (twin engine, high wing fixed landing gear, a rugged airplane with good short field performance).

Alison had booked our tickets previously and we showed up about an hour before the flight, returned our rental car (by calling them and letting them know it was back). They operate out of Tingwall airport that is smaller than the main Shetland airport and the two Islanders seem to be the only aircraft based there.
This is really more like a taxi service, and when we announced who we were the gentleman (who turned out to be one of the pilots) said that we could go early if we liked, as we were the only passengers!
We boarded and it was then discovered that we had some freight to load. This actually was a small plastic bag of some medication but obviously important to the recipient. We were informed that the flight would be 12 minutes at 1000 ft.
It was a fantastic clear day and visibility was unlimited, unusual for Shetland I suspect. We could see Out Skerries as soon as we reached 1000 ft. This particular flight will stop at another strip (Walsay) on the way as needed, but obviously we made no stop on this flight. When we were in the Caribbean we landed on Saba where the runway was 390m, and the pilot, Quentin who is from Botswana told me that Out Skerries is 380m and a gravel runway.
We landed to the west and the “Terminal building” which actually housed the fire truck was at the east end. The airstrip is fenced presumably so sheep do not wander onto the strip but there are stiles to cross the fences for walkers when planes are not landing (see stern notices). Mags had asked Steve where the house we had rented was, and was told, “it is near the ferry terminal”, which was not a lie as the ferry terminal was a 3 minute walk away. What he had purposely not said was that the house was literally across the fence from the runway and “terminal”. It had all been an elaborate plot to surprise me with the location and I fell for it, as did Mags who did not know either. There were many on the island that knew and enjoyed the fun. They had gone as far as to hide their car so as to not give the location away.
So a walk of about 20m to our rental house and a good laugh all around.
Out Skerries consists of two main islands connected by a short narrow bridge, and has about 2 miles of paved roads. There are several smaller islands that can be reached by boat, and one of them is the location of the lighthouse. It is one of about 140 lighthouses built in the late 1700 and 1800s to try and keep shipping away from dangerous rocks. Originally all were manned but are now all automatic and the Skerries light was converted in the ‘70s I believe.
Lighthouses are a whole new subject but have become something of interest to me over the last year or so.
Skerries has two small shops with one of them serving as the Post Office also, a small school with about 5 students right now, a nice well protected harbor and not a whole lot else. 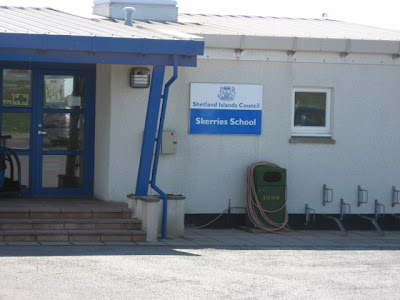 We rented the only self-catered home on the island and there is one B&B that can host 6 guests. This would include people coming to the islands for work (builders etc).
The house we are in has two bedrooms and has been remodeled in the last couple of years. It has been very well done and is a beautiful house to stay in with a great view.

Needless to say it is not a huge tourist destination but has a reputation as a great place for bird watching and if you want to get away from it all this would be the place!
We have taken a couple of good walks, one the afternoon we arrived up the hill behind the house and a longer walk yesterday almost to the far end of the other island. That walk was maybe 4 miles in total but across rough grass and rocky fields so not done at a fast pace by any means.

The weather has been fantastic with temperatures around 15-18C and blue skies and a light breeze. I believe that the weather here can be horrendous with severe gales and driving rain, and that coupled with very short days in the winter could be depressing in a hurry. I know that there are problems with alcohol and drugs on Shetland in general but it is tough to believe that either would be tolerated here for very long as close as the community is.
I understand that there is one couple (incomers I believe they are called and that includes people from mainland Shetland) who do not socialize at all but pretty much everyone else does and there seems to be an impromptu gathering at the small store by the harbor when the ferry arrives with fresh bread and milk. We were a part of that yesterday and met many of the families.
There is one lady Anna Henderson who is the matriarch of the island, and was actually born on mainland Shetland but came home at 10 days old and has lived here ever since. I estimate she is in her late 70s and has a home that overlooks the whole of the inhabited part of the islands. She has kids, grandkids and just recently a great grand daughter.
We met Ethan, one of the grandkids on a couple of occasions. Mags met him at school and we saw him again at the milk and bread gathering, and as we walked up to visit with Anna. He had just “inherited” a small shed (maybe 1.5m square) from the District (Community) nurse who had just left for another job. She had used it for her cats as she could not keep them in her (community owned) house / surgery/ Dr office. I am sure there was another transaction but Ethan paid the lady with a picture of a Ten pound note cut out of a magazine! He then announced to his Mum that he wanted to have a shed warming party to which several relatives were invited and provided with decorated cup cakes. A property magnate in the making? . Maybe.
Shetlanders have their own very distinct dialect and even that will vary by location although they will all understand each other. There is also an informal system where they will automatically switch into a more easily understood language when non-Shetlanders (incomers or Southmouths, because they arrived via the South mouth of the Lerwick harbor) are present. It is called “knapping”

Sometimes even that is difficult to comprehend at first but your ear develops quickly although not for the true Shetland dialect.
On our long walk we passed through the community on the other island and then out on to the open grassland that provides rough grazing for the sheep and not a whole lot more.
We had the open sea on one side and the island and harbor on the other with the sea beyond.
Steve suddenly called our attention to something in the sea maybe ½ a mile offshore and after a few second confirmed that it was three orcha (killer) whales. They are often seen in Bluemull sound between Unst and Yell in May and they come to feed on the seal pups. It was a superb site that was over all too quickly.
We were the only visitors on the island but the Thursday plane bought the Doctor and a podiatrist from Walsay for their monthly visit and clinic.

There is a resident District Nurse who has day-to-day responsibility for the health and care of the residents with some excellent phone support from mainland Shetland and also from Aberdeen and Inverness. Seriously ill patients are airlifted out to either Lerwick or Inverness for treatment. It is a high level of responsibility but the system seems to work well for all.
We spent the last evening “visiting” and went to meet Anna the matriarch Her home overlooks the whole of the community and we spent a pleasant time discussing island life and how content she is with it.

We also visited the only other accommodation the B and B and met Davy and ??? who are the owners along with Davies’s brother Charlie who lives there too
We were away on the 90-minute ferry ride the next morning along with a young man who was on his way to take his First Mate’s exam in Glasgow. He works on tankers most of the time. We also had the fuel truck that had come in on the morning ferry to replenish stocks of diesel, heating oil and gas (petrol)
Back to mainland Shetland for the night and we are off to Fair Isle tomorrow.
Posted by cruicad at 7:32 AM